University of Anbar (UOA) Holds 1st Women Festival under Title : We are Well 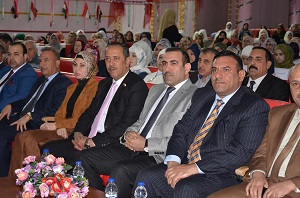 Celebrating the World Women Day 8 March  annually and out of boosting the role of women in society , Women Affairs Committee of Anbar University held ,today 12 March , 2018 , the 1st Women Festival  under Title " We are Well " .Many remarkable figures attended this event such as Prof. Dr. Khaled Batal Al-Najim head of Anbar University , his two administrative and scientific assistants , deans of colleges , parliamentary figures , Mrs. Kolshan Kamal DG of Women Support Fund , Dr. Hana'a Edward ; the well-known human activist and head of Iraqi Women Group ; university instructors , employees and students .   The celebration was held at the Grand Conference Hall of the university , starting with reciting some verses of the holly Quran and Opening Chapter for the souls of the Iraqi martyrs followed by playing the Iraqi National Anthem .

On this occasion , head of Anbar University Prof. Dr. Khaled Batal Al-Najim gave his speech welcoming the guests to Anbar University after defeating terrorism , stressing at the same time that this world day is a remarkable one and has its trace on us all , for it is the day of our mothers, our wives and daughters to express their rights and duties in society .And that women could overcome and bear bravely all those loads and responsibilities .And the best example about that  is women role in progressing our university . He appreciated those who were in charge of that outstanding  festival .

As a complimentary activity , Assist. Prof. Dr. Zinah Mohammed Sabti ; head of Women Affairs Committee of Anbar University and head of the Dept. of Quality Assurance of the university presidency gave her speech ,  pointing out that university of Anbar was the only one who had decided to form this committee .She also expressed her honor to head such committee stating that we all ought to celebrate the day of our mothers , daughters , wives and sisters as all those bring forth hope and compassion .In this respect she expressed her gratitude to the university president for supporting  women .

Dr. Hana'a Edward ; head of Iraqi Women Group ; gave her speech in which she drew upon the importance of backing women to take her societal role efficiently .

The festival went on to include many poems recited by she-students and she-instructors followed by showing a film titled ( Work in Silence an Let Your Work Speak about You ) and documented the overloads women faced during displacement and suffering in particular at Bizeebiz bridge , camps and practicing some handicrafts to feed their children .The celebration also witnessed the first step for forming Women Affairs committee  and its duty in supporting cultural , scientific activities and the voluntary campaigns to support the displayed Iraqis .

An operetta (We Re Well ) was shown to express hope , optimism, defying all evil powers and terrorism and women 's role in life .The school of Anbar University took its outstanding participation through the paintings of its students under title (Homeless Birds) .

The festival was concluded after the president of the university handed many University Shields to the participating guests .In their return the administrative and the  scientific assistants of the university president handed Letters of Appreciation( LoA) to some excellent  she- instructors , she- employees .

Thereon the university president inaugurated a photo , paintings and handicrafts show followed by a Rose Fair by the Faculty of Agriculture .

Setup page for printer Back to previous page