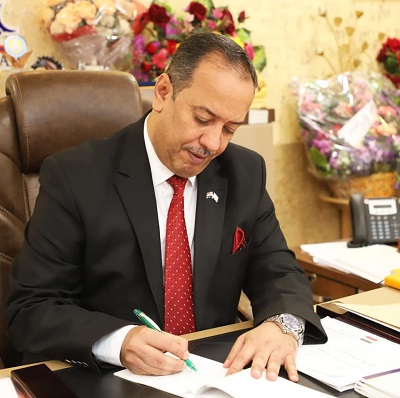 Since its establishment in 1987, the University Of Anbar was determined to be among the distinguished and top universities, to be a cultural and scientific institution which plays its role in preparing specialized scientific staffs that contribute into building and improving the modern development wheel in Iraq. On top of its priorities, the University Of Anbar was enthusiastic to prepare a committed generation entertaining prosperous and secure living opportunities.

The University Of Anbar aspires to be in the top rank among world universities, not only on the national, but on the regional and international levels. The successive ex-presidents of the University Of Anbar have been very keen in achieving this goal, regardless of the variation in orientations or differences of perspectives. All have integrated their efforts and unified their intentions to achieve distinction and arrive at world reputation.

Initially, the University Of Anbar was established consisting of two colleges only. Then, it was developed and expanded to encompass eighteen colleges covering different human and scientific domains, in addition to two service centres and four research centres.

Despite the destruction in all the Universality’s institutions and its infrastructures during the invasion of ISIS, the wheel of scientific achievement of the University Of Anbar has never stopped. It still steps up towards progress and development until it has occupied top positions among Iraqi universities. Moreover, the University Of Anbar has achieved a dazzling success by being indexed in several world ranking systems. Currently, it is on its way to be indexed in the globally acknowledged QS ranking.

Starting from the day of being appointed as the president of the University Of Anbar, I exerted great efforts to complement the move of the ex-presidents, with a commitment to improve the University plans and renew its move. We worked on various directions at different levels. Firstly, we focused on improving the three pillars of the educational process, namely, the academics, the students and the syllabus. We created developmental training courses for the academics, whereby, several training packages have been approved; some were designed for teacher assistants, others for instructors and still others for assistant professors.

Our care for the students was great and our directed attention to them was tremendous since they represent the final product of the university work and its perfect performance. We rigorously worked to improve the students’ levels and develop their potentials. Accordingly, some student groups were delegated to some acknowledged regional and international universities to expand their cognitive capabilities, gain experience and achieve optimal utilization of global expertise.

As for the syllabuses, we were very keen to direct colleges and scientific departments to periodically reconsider and improve their curricula to keep pace with the development of sciences and meet the new needs of the society. Moreover, University academics have actively participated in ministerial panels formed to reconsider teaching curricula for all disciplines in the Iraqi universities.

It is worth noting that work at all levels and directions in the University Of Anbar progresses in accordance with a strategic plan clearly and carefully designed with great efforts, and has been approved by the University Council. It is a realistic and applicable plan compatible with available resources. Moreover, it is a flexible plan which goes in line with new needs and interests of the changing conditions. It is renwable and can be modified and improved, an issue which actually happened in several occasions. On this basis, the move of the University and its progress would be based on carefully planned steps after rigorous examination.

Our ambition is to make more achievements, which would not come true unless efforts are collaborated and capabilities integrated.

Finally, I want to emphasize that the University Of Anbar is for all Iraqi people, whatever it achieves represents achievements for all Iraqi people. The University Of Anbar is an Iraqi campus which disdains any narrow ethnic, sectarian or party affiliation. It has academics and personnel from all sects and nationalities unified by honest loyalty to Iraq and the true desire for knowledge, progress and development.

President of University of Anbar